The measurement of earth resistance for an earth electrode system is very important. It should be done when the electrode is first installed, and then at periodic intervals thereafter. This ensures that the resistance-to-earth does not increase over time. There are two (2) methods for testing an electrical earthing system. The first is the 3-point or Fall-of- Potential method and the second is the Induced Frequency test or clamp-on method. The 3-point test requires complete isolation from the power utility. Not just power isolation, but also removal of any neutral or other such earth connections extending outside the earthing system. This test is the most suitable test for large earthing systems and is also suitable for small electrodes. The induced frequency test can be performed while power is on and actually requires the utility to be connected to the earthing system under test. This test is accurate only for small electrodes, as it uses frequencies in the kiloHertz range, which see long conductors as inductive chokes and therefore do not reflect the 60 Hz resistance of the entire earthing system. 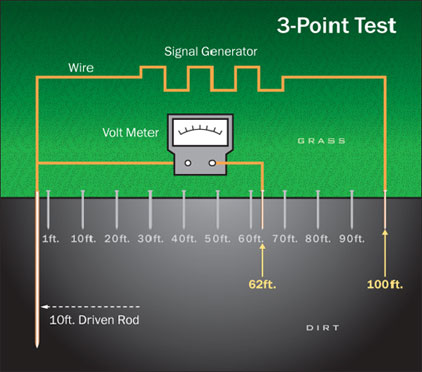 At this point, a known current is applied across X & Z, while the resulting voltage is measured across X & Y. Ohm’s Law can then be applied (R=V/I) to calculate the measured resistance. Probe Y is then moved out to a distance of 2X the diagonal length of the earthing system, in-line with X & Z, to repeat the resistance measurement at the new interval. This will continue, moving probe Y out to 3X, 4X, … 9X the diagonal length to complete the 3–point test with a total of nine (9) resistance measurements. 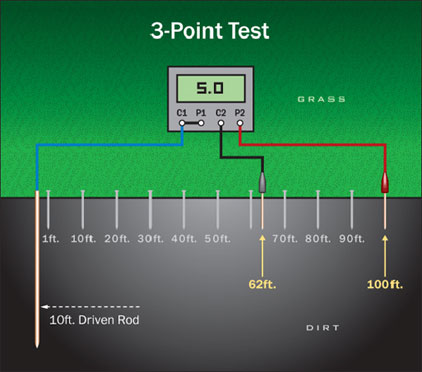 If no semblance of a plateau is found and the graph is observed to rise steadily the test is considered invalid. This can be due to the fact that probe Z was not placed far enough away from rod X, and can usually indicate that the diagonal length of the earthing system was not determined correctly. If the graph is observed to have a low plateau that extends the entire length and only rises at the last test point, then this also may be also considered invalid. This is because the utility or telecom neutral connection remains on the earthing system.

The Induced Frequency testing or commonly called the “Clamp-On” test is one of the newest test methods for measuring the resistance-to-earth of an earthing system or electrode. This test uses a special transformer to induce an oscillating voltage (often 1.7 kHz) into the earthing system. Unlike the 3-point Test which requires the earthing system to be completely disconnected and isolated before testing, this method requires that the earthing system under test be connected to the electric utilities (or other large earthing system such as from the telephone company) earthing system (typically via the neutral return wire) to provide the return path for the signal. This test is the only test that can be used on live or ‘hot” systems. However, there are some limitations, primarily being:

Many erroneous tests have been conducted where the technician only measured metallic loops and not the true resistance-to-earth of the earthing system. The veracity of the Induced Frequency Test has been questioned due to testing errors, however when properly applied to a small to medium sized, self-standing earthing system, this test is rapid and reasonably accurate.

The proper use of this test method requires the utility neutral to be connected to a wye-type transformer. The oscillating voltage is induced into the earthing system at a point where it will be forced into the soil and return through the utility neutral. Extreme caution must be taken at this point as erroneous readings and mistakes are often made. The most common of these occur when clamping on or inducing the oscillating voltage into the earthing system at a point where a continuous metallic path exists back to the point of the test. This can result in a continuity test being performed rather than a earth resistance test. 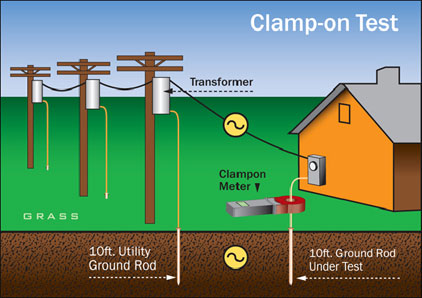 Understanding the proper field application of this test is vital to obtaining accurate results. The induced frequency test can test earthing systems that are in use and does not require the interruption of service to take measurements.

Earth resistance monitoring is the process of automated timed and/or continuous resistance-to earth measurement. These dedicated systems use the induced frequency test method to continuously monitor the performance of critical earthing systems. Some models may also provide automated data reporting. These new meters can measure resistance-to-earth and the current that flows on the earthing systems that are in use. Another benefit is that it does not require interruption of the electrical service to take these measurements.