Steve asks, how does lightning kill multiple animals in a single strike?

Herd animals that gather in groups are typically killed not by a direct lightning strike, but by the current flowing through the earth from the strike. What happens is that the lightning strike often hits a tree or the earth near where the animals are gathered and the electrical current then spreads along the surface of the earth and shocks any people or animals in the vicinity of the strike. Electrical current literally goes up one leg and down the other back into the ground. Eventually, the current dissipates as it flows further and further from the strike point. 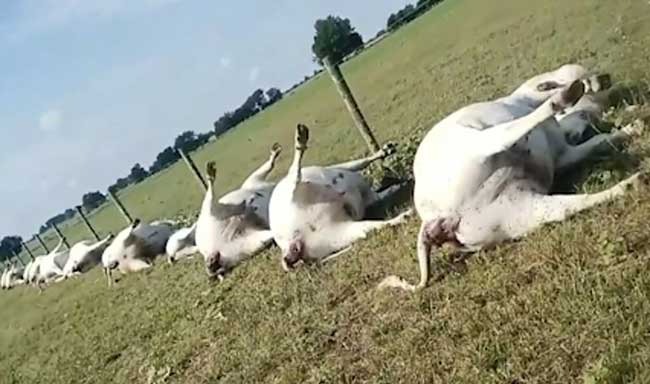 For example, 23 cows were killed instantly after lightning struck the metal fence they were standing next to during a storm in Texas recently. Since the cows were all lined up next to the fence, they were all impacted by the lightning strike and burn marks on their stomachs indicated that electrical current had flowed through their bodies, killing them instantly.

The average lightning strike can carry more than 20,000 amps of electrical current, more than enough to kill a herd of cattle by passing through their nervous system and instantly stopping their hearts. It doesn’t matter whether the animals are touching or not, or how close they are to each other. The only thing that matters is how close they are to the strike point and how powerful the strike is.

We call this phenomenon “Step Potential”. Step potential is the voltage between the feet of a person or animal standing near an energized object. Interestingly, animals are even more vulnerable than humans to step potentials because their legs are farther apart, so earth currents can travel more easily through their bodies.

How far can the ground current travel?

Hazardous step potentials can occur at a significant distance away from any given strike and the more current that is pumped into the ground, the greater the hazard. Animals have been reported to have been killed at distances over 250 feet from a lightning strike which shows just how far electrical current can travel through the earth.